When we left Mexico City, Gregor had a slightly sore throat. We thought it was just the pollution, but when we got to Oaxaca state it had turned into a full-blown flu. I asked Gregor if he wanted to recover in a hotel, but his answer was “no”.

“The van is our home now.” Gregor said. “We can’t just run to a hotel every time we feel uncomfortable.”

After that weekend, I caught Gregor’s flu. We were both so sick, but neither of us had the energy to pack up and move the van. 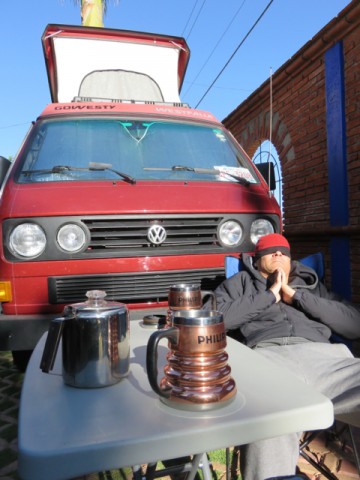 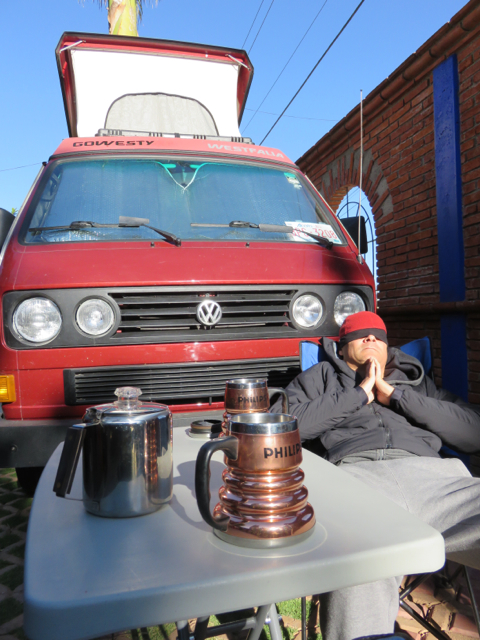 Over a period of two weeks, we went through three boxes of Kleenex, two bottles of cough medicine, two packages of sinus medication, and an entire tin of throat lozenges. We coughed and sniffled and moaned and took turns nursing each other back to health. It was a pretty miserable time.

Throughout our recovery, we were grateful for two things…

One: We weren’t vomitting or suffering from diarrhea. That would have been a complete nightmare.

Two: We were parked at Overlander Oasis, a campground just outside of Oaxaca City, in a town called Santa Maria del Tule (locally known as ‘El Tule’). 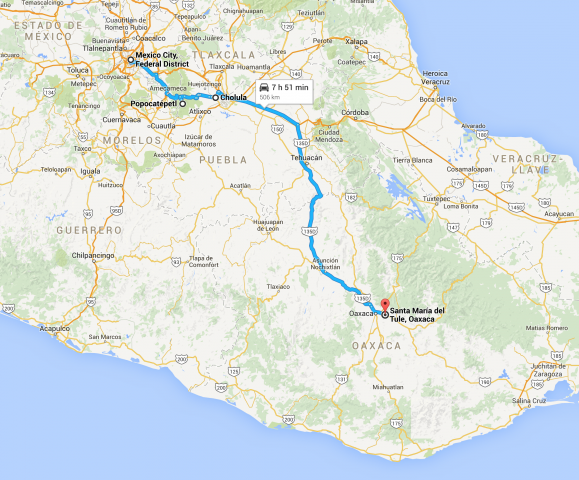 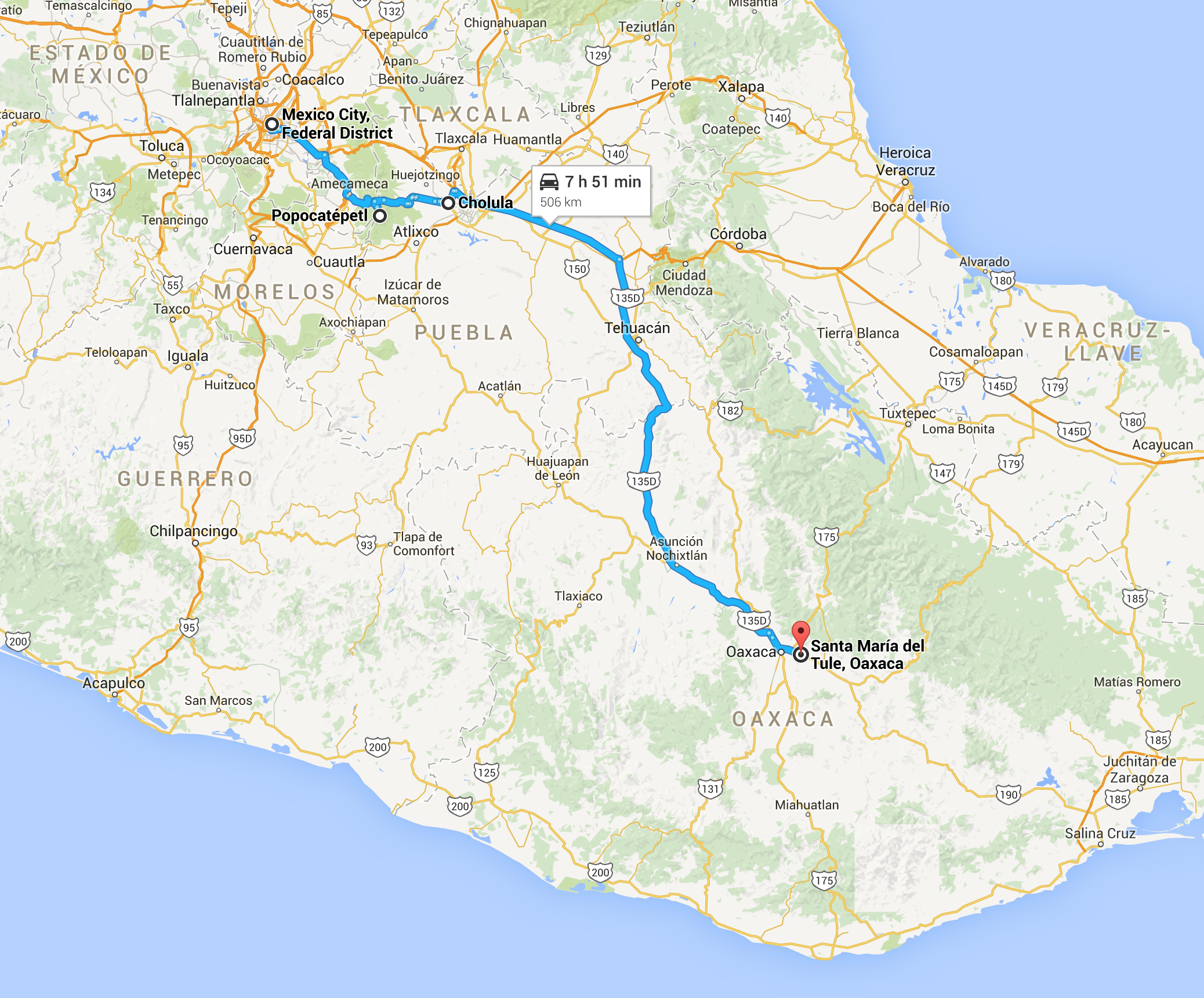 Overlander Oasis is run by a Canadian couple named Leanne and Calvin Mackenzie. Eight years ago, these adventurous folks drove to Oaxaca state in their 1950’s era Greyhound bus-turned-camper and never left. 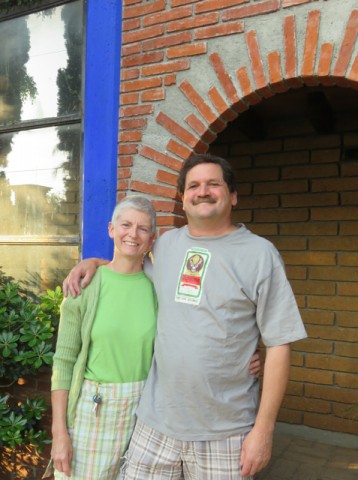 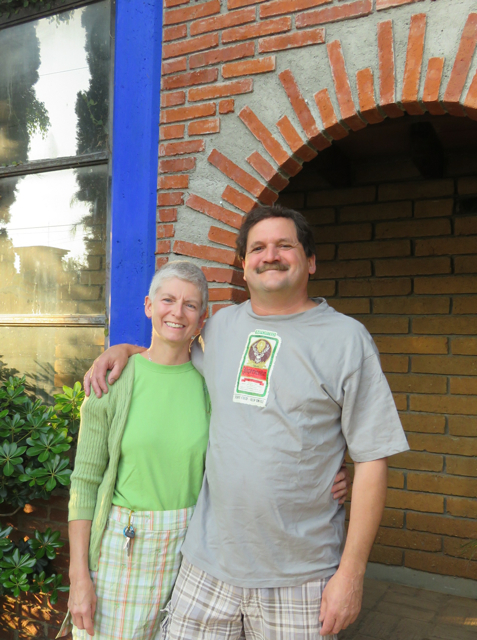 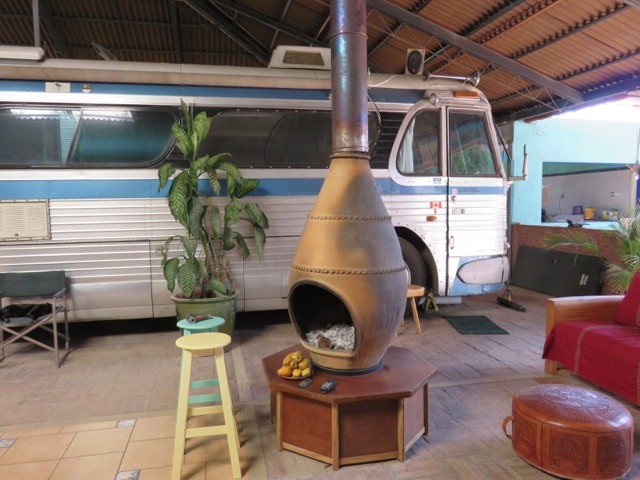 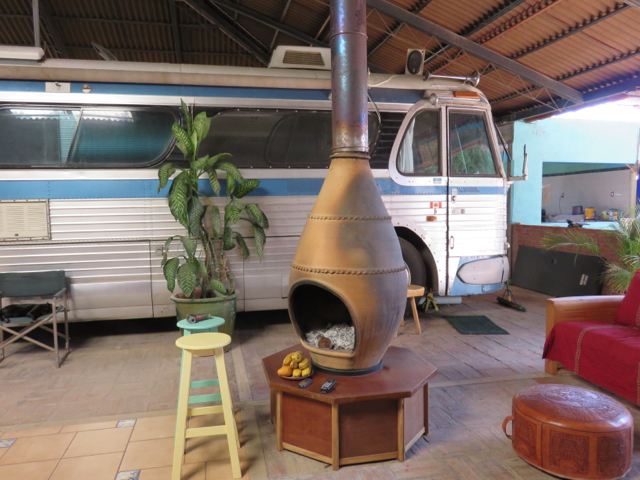 Leanne and Calvin still live in the Greyhound bus.

Leanne and Calvin turned their front yard into a campground to support the overlander community (travellers like us with small, self-contained campers), as opposed to the RV community (snowbirds with huge rigs that require long-term access to water, sewer, and electricity). Their property can support up to five small rigs. 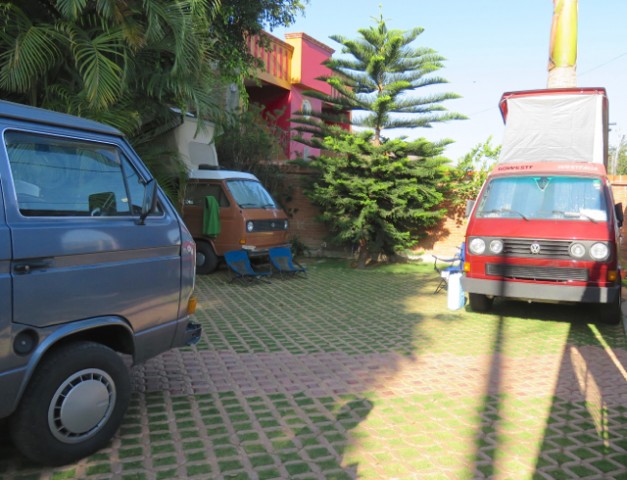 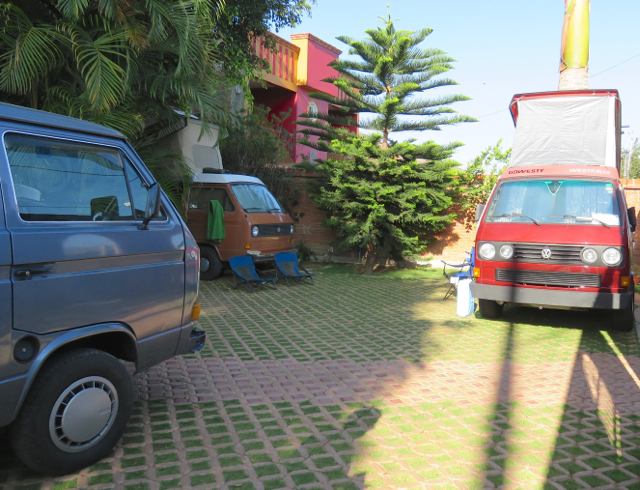 Looking back at all the campgrounds we’ve visited so far, Overlander Oasis is the only place we would have wanted to be during our flu. Local vendors came to the campground gates every day selling purified water, cooked food, and fruits and veggies, making our recovery so much easier. Leanne and Calvin were incredibly helpful and supportive, doing whatever they could to keep us comfortable. Even their dog, Morena, showed her support by greeting us at the van every morning. 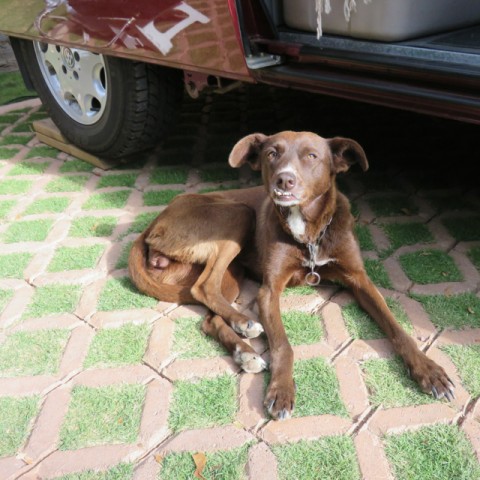 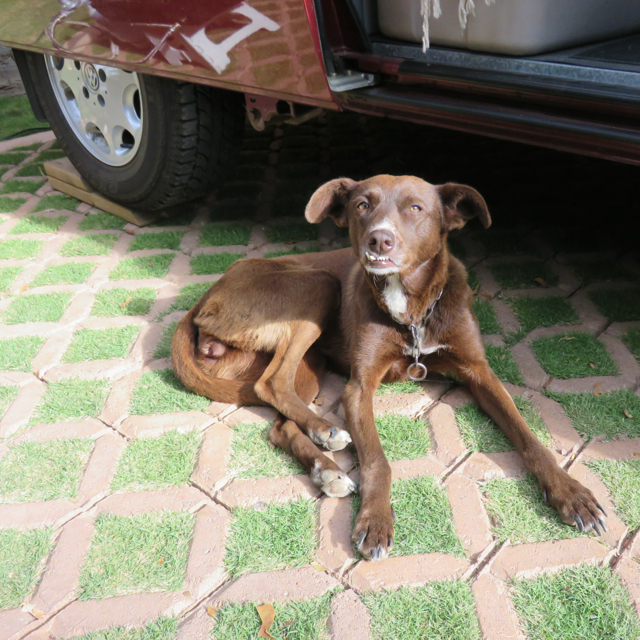 Morena’s underbite always made us smile

Our fellow campers also cheered us on to get better and get back on the road. We met three Californian couples who, like us, are driving the Americas to Ushuaia, Argentina… 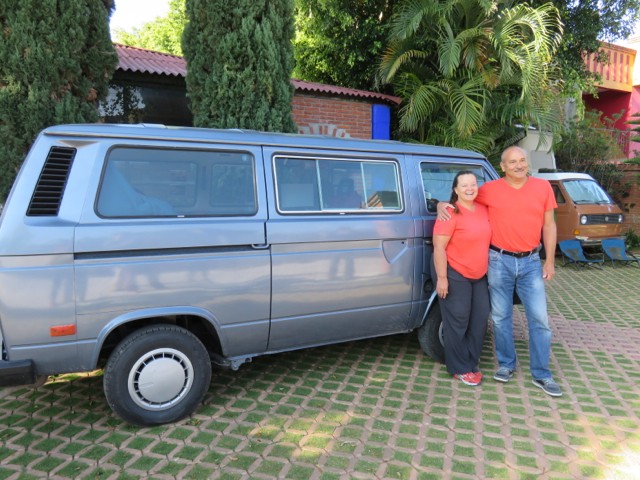 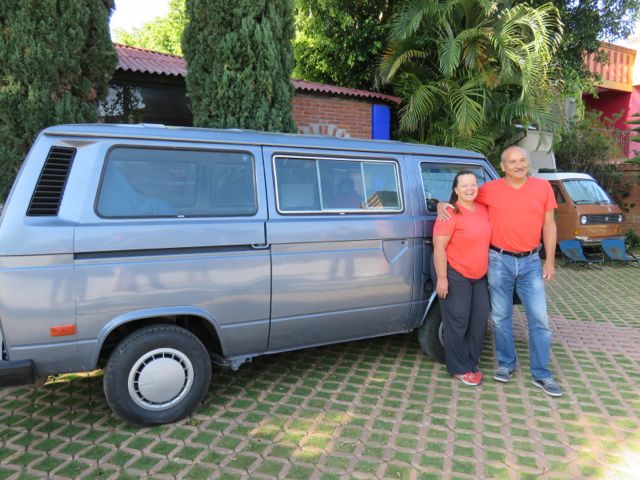 Karen and Adam with their VW Vanagon, ‘Chinook’. You can follow their travels in “This Journey We Call Life”. 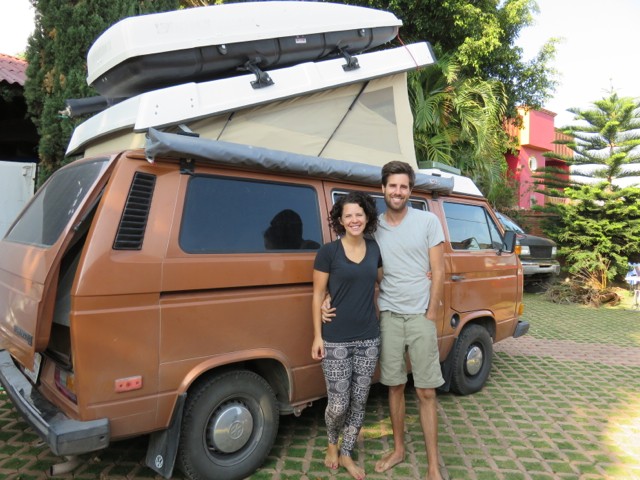 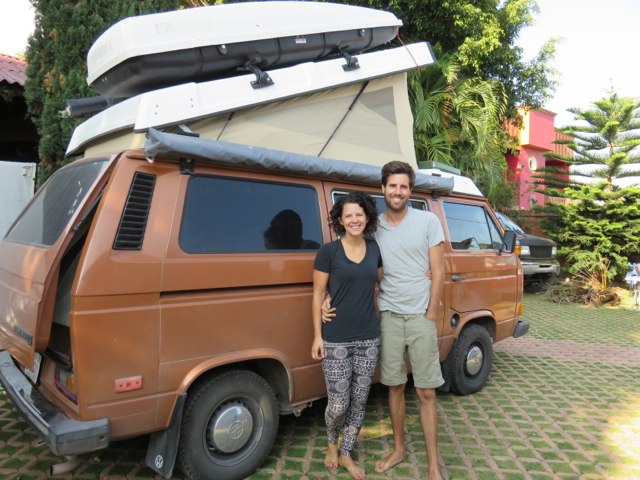 Jacqui, Cameron, and their air-cooled VW Westy, ‘Penny’. These avid windsurfers have a blog called “Follow the Wind”. 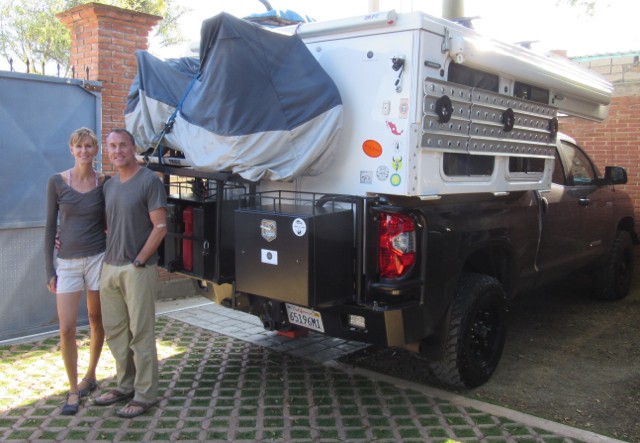 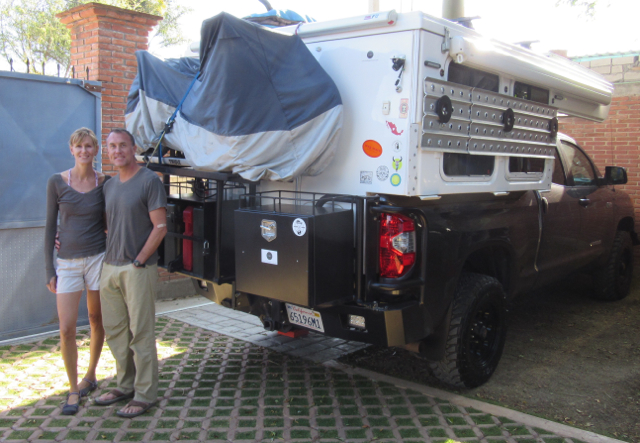 Paula and John and their Toyota pickup camper, which they informally call ‘The Beast’. They named their Pan-American journey “Our Bigger Picture”.

We made it through the worst of the flu under Lucky’s shelter, with the support of the friendly people around us. It took us 10 days to recover with enough energy to do a day trip to Oaxaca City. 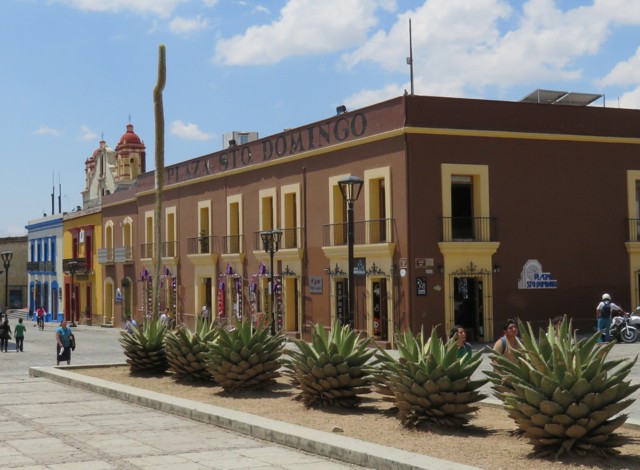 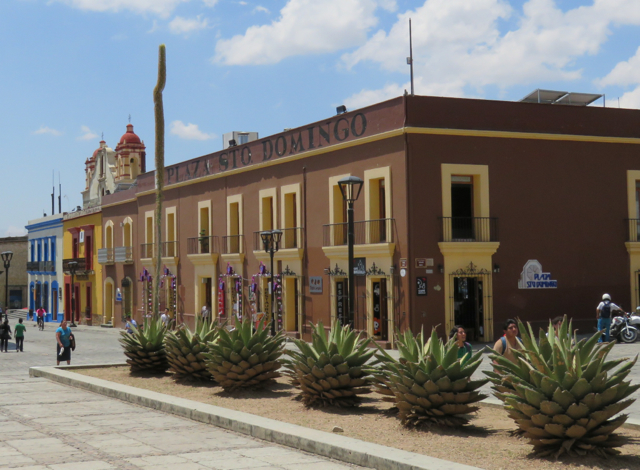 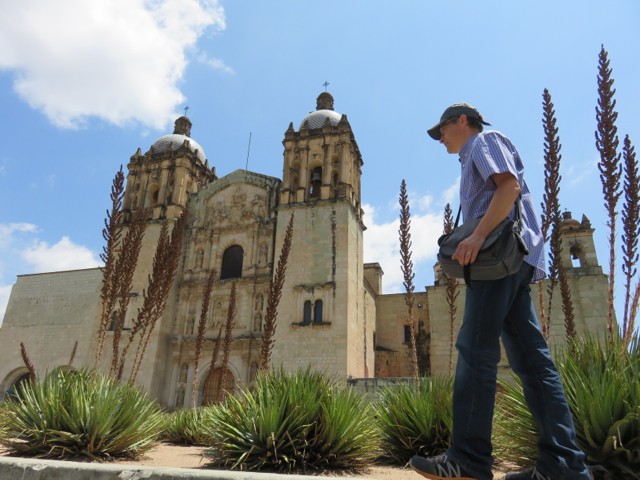 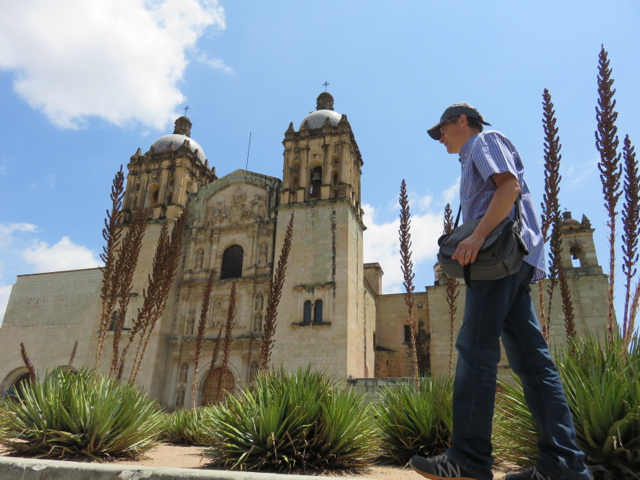 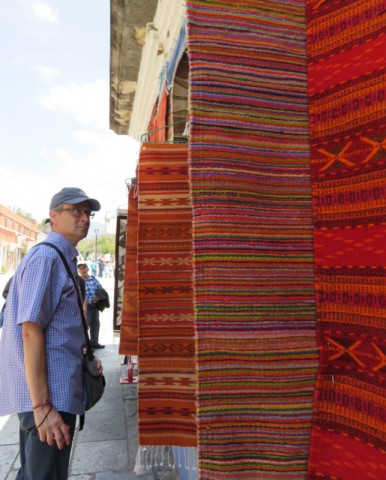 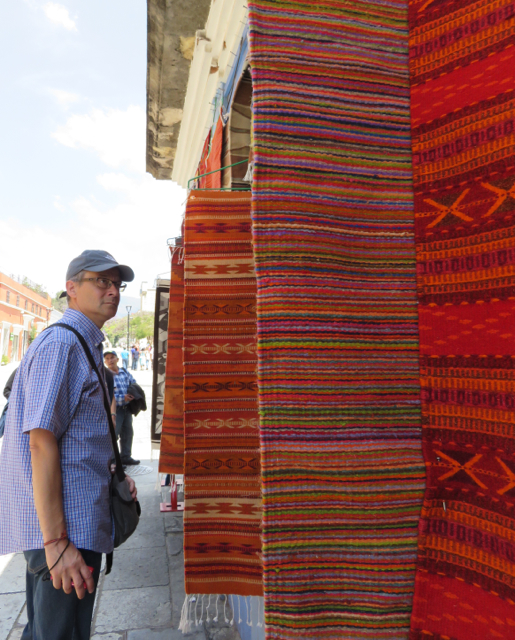 Our experience with the flu made us realize that we had been running ourselves ragged – especially Gregor. On driving days, his energy went to dodging crazy Mexican drivers and braking constantly for ‘topes’ (speed bumps that are commonly found at intersections and school zones, but are also scattered throughout populated areas for no good reason whatsoever). When Gregor wasn’t driving, he was busy working on the computer or running around finding a decent Internet connection so that he could work. And when he wasn’t driving or working, he was fixing something on the van.

We felt like we were back in the rat race that we escaped when we left Calgary. Something had to give.

Ultimately, we decided that Gregor needed to work less. He explained his predicament to his boss and they agreed to two remote work days a week instead of four – with a proportional pay cut, of course. This was not an easy decision (after all, extra money is always nice) but when you’re living the dream, time is often more precious than money.

The moment Gregor cut back his hours, we finally accepted that our journey to Argentina is not just a ‘trip’ – it’s a lifestyle.