“Ugh, my head,” Gregor groaned. I would have also groaned if my mouth wasn’t so parched from the excessive drinking the night before. We celebrated our last night on the Baja peninsula by sipping margueritas and then shooting straight tequila and premium Jack Daniels in our van with fellow Westy travellers, Annie and Jeff. It was now the morning after, and Gregor and I were going to be on a ferry to Mazatlan in only a few hours.

Our camp spot at Playa Tecolote

“What were we thinking?” I said to Gregor, reaching desperately for my water bottle.

“I’m not drinking tequila EVER AGAIN.” Gregor vowed, shuffling out of the van to go for a pee.

I picked up the empty bottle of Gentleman Jack, a gift from my cousin Emil whom we visited in Orange County, CA. I was sad that the bottle didn’t make it to mainland Mexico.

We packed up the van slowly, careful not to move our heads around too much.

The day before, we were scurrying around La Paz to fulfill two objectives…

The first was to feed Gregor Baja fish tacos and beer for lunch. Two weeks in Baja and we had plenty of access to fish tacos but the taquerias we happened to visit did not serve beer – only pop. We found a palapa restaurant that served Gregor his long-awaited meal. It was a happy time. 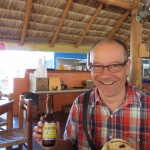 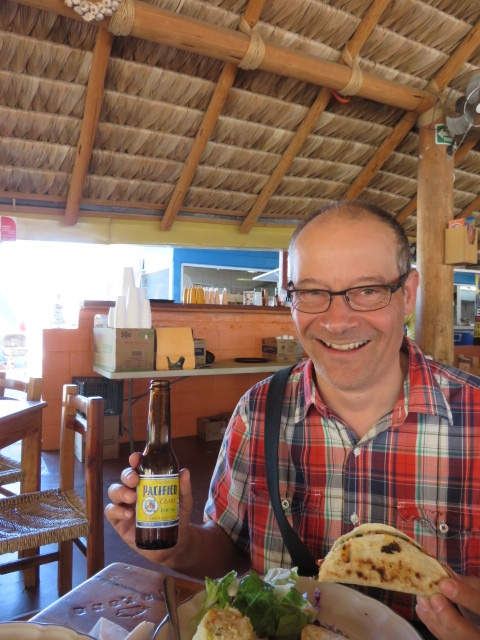 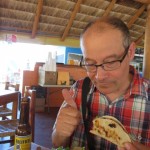 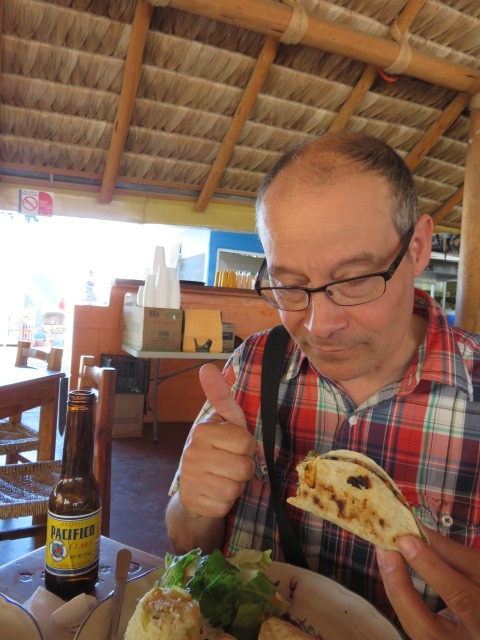 Our second objective was to buy tickets for the overnight ferry to Mazatlan, which was scheduled to leave La Paz at 5 pm. We went to the ferry terminal about 3 hrs before to see if we could buy cabin tickets. We really wanted a cabin so that we could treat ourselves to a comfy bed and a hot shower during the 17-hour ferry ride. The nice lady at the kiosk said to come back at 1 pm the next day (“mañana”).

In Mexico, it’s perfectly acceptable to come back “mañana” to receive a service that would normally be provided “hoy” (today) were it not for some non-sensical breakdown, delay, red tape, or random event that would never occur in Canada or the US.

The ticket lady advised us to come back “mañana” so that our van could get properly weighed at customs right before boarding. She said that after getting our weight stub from customs, we could pay for the van passage and our cabin tickets all at once…well, that’s what we think she said. She didn’t speak English and our understanding of her Spanish instructions was marginal. All we heard was “mañana” at 1 pm.

“OK,” we said, “We’ll come back tomorrow at 1 pm.” Gregor turned to me and whispered that we should come at noon just in case.

Despite our raunchy hangovers, we managed to pack up the van and get to the ferry terminal at 12:00. That was the start of our 27-hour journey.

We weighed our van at customs: 2380 kg (5250 lbs). Then we went back to the terminal to pay for our van passage and cabin tickets. We were relieved to see the same ticket lady at the kiosk. She recognized us immediately and started to process our tickets.

As I pulled out the cash to pay, she announced that there were no more cabins available. We would have to spend the 17-hour ride in upright economy seats, with no access to showers.

Gregor and I were dumbfounded and highly disappointed. On the way to the terminal, we fantasized about having a long, hot shower in the private bathroom and then drying ourselves off with newly bleached towels before tucking ourselves into a bed with clean white sheets and a real mattress. We would have been perfectly happy with a crappy mattress – at least we could lie down instead of sitting in a chair all night.

We were hung over and hadn’t showered in days, but we couldn’t bear to come back “mañana” and go through this rigamarole again. So we decided to take the economy seats and wallow in stinkiness for one more day. Boarding was scheduled for 15:00.

It turns out that Baja Ferries only allows one person to drive onto the ferry with the vehicle – all other passengers must board the ferry on foot. This meant that Gregor and I had to separate at 15:00 to board the ship. 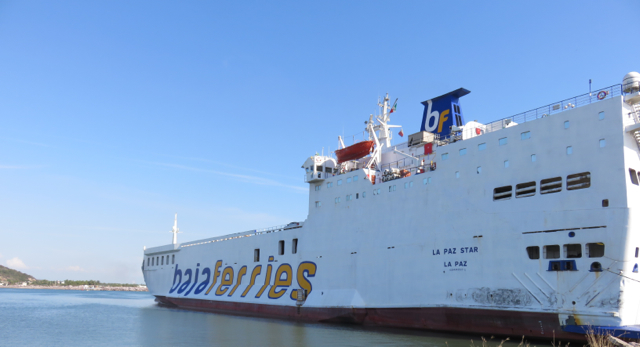 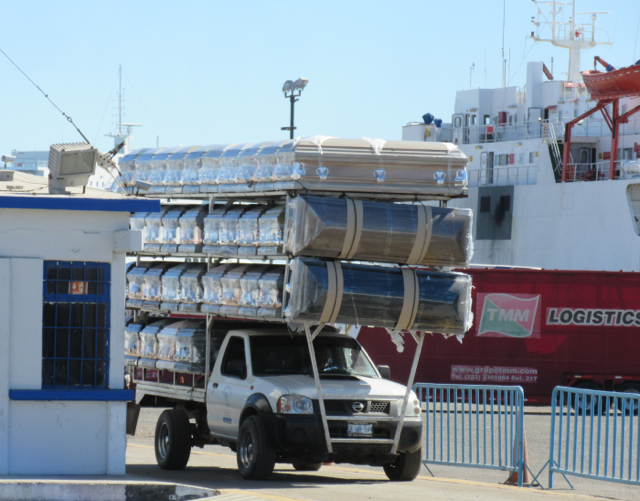 Here’s how the rest of the trip went:

– 18:00 – I finally reunited with Gregor (we were separated for 3 hours). At that time, I asked the concierge if any cabins were unoccupied. I wasn’t going to give up The Dream. The concierge said to come back and ask again after we set sail.

– 19:30 – Dinner is served (included with our ticket). All the passengers line up at the cafeteria like it’s Black Friday at Best Buy. 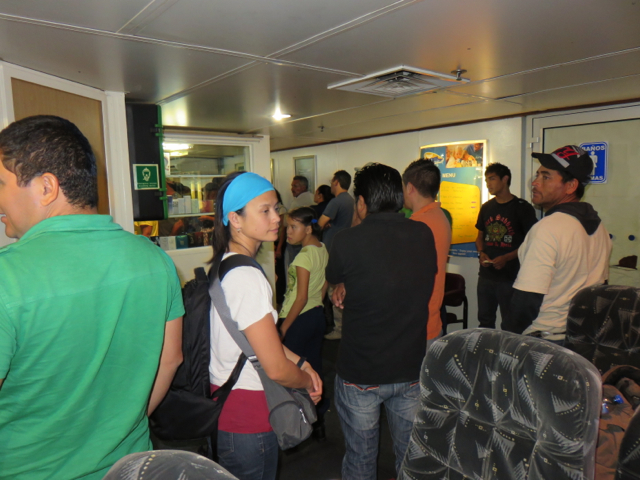 Janice trying to blend into the dinner queue 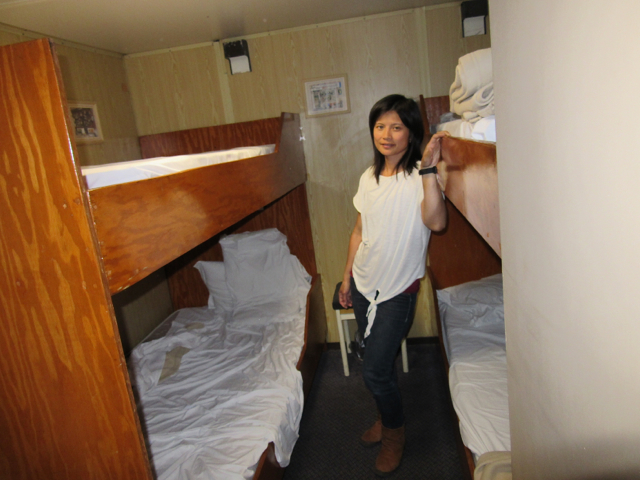 The cabin smelled musty, had no air conditioning, and didn’t have WiFi or 120 V plugs (only European plugs), but it did have white towels and clean sheets that barely covered the bed. It goes to show that you should never give up on The Dream.

– 8:00 Wednesday – Breakfast is served. The movie playing in the cafeteria was an absolutely gruesome SWAT team movie starring Arnold Schwarzenegger called Sabotage. It was one of those movies where every character is taken down one-by-one in some violent, excessively bloody confrontation involving overpowered guns.

– 10:00 – The cafeteria movie switches to Jarhead 2, a war movie set in Afghanistan. It was another one of those movies where every character is taken down one-by-one in some violent, excessively bloody confrontation involving overpowered guns.

– 11:00 – The scheduled arrival time. We’re still in the middle of the Sea of Cortez with no land in sight.

– 14:00 – The captain announces our arrival at Mazatlan. Gregor leaves to fetch the van. All the passengers line up to disembark like it’s Black Friday at Best Buy. 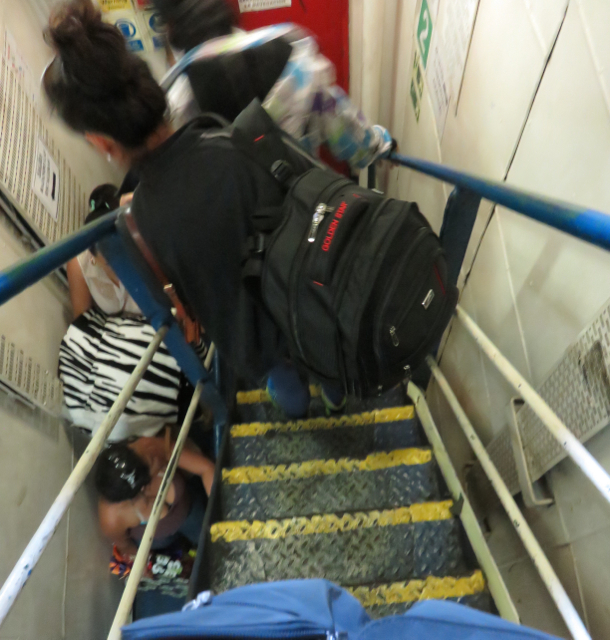 Climbing down narrow stairs to get off the ferry 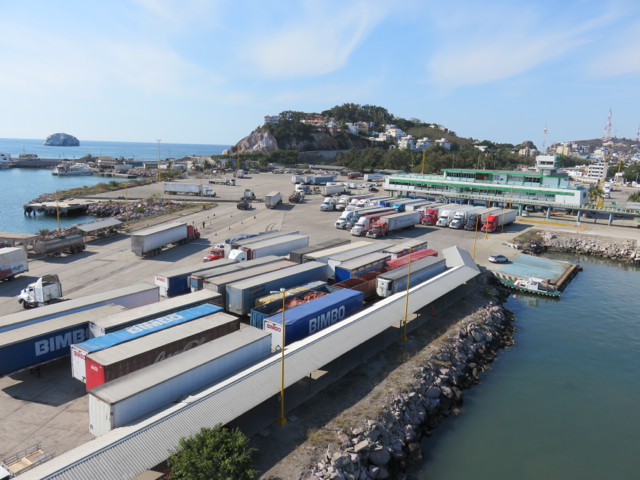 – 15:00 – Gregor and I re-unite at the parking lot and we drive to San Fernando RV Park in Mazatlan. 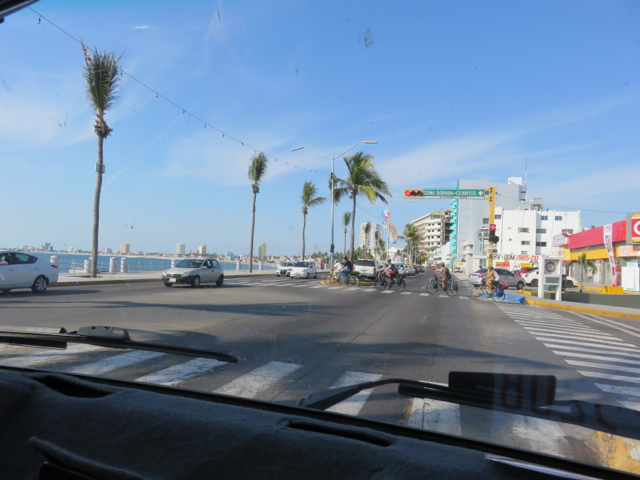 6 thoughts on “La Paz to Mazatlan Ferry: The 27-Hour Trip”