We drove from the whale watching eco-camp in Laguna San Ignacio to the bustling city of La Paz in 7 days. Our goal was to take the ferry from La Paz to Mazatlan and explore mainland Mexico. 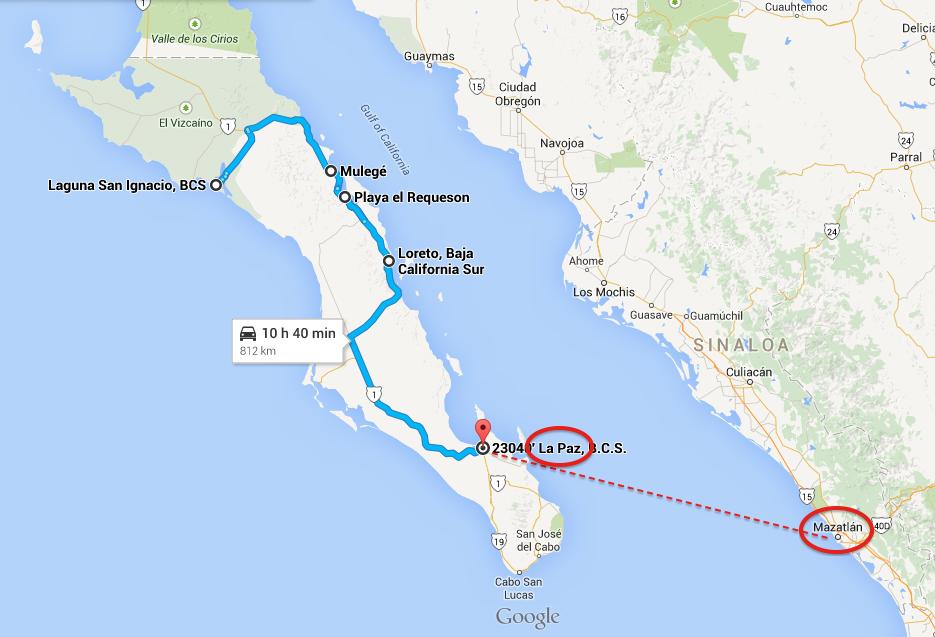 As we traveled south down the Baja peninsula, we met other nomadic travellers that we kept running into over and over again along the way.

One couple that followed our same path was Annie and Jeff of Roads to Roots. Annie is a gardener and Jeff is a bike mechanic. These fun-loving bohemians from Colorado souped up their white VW van, ‘Delilah’, to explore Baja and western USA. 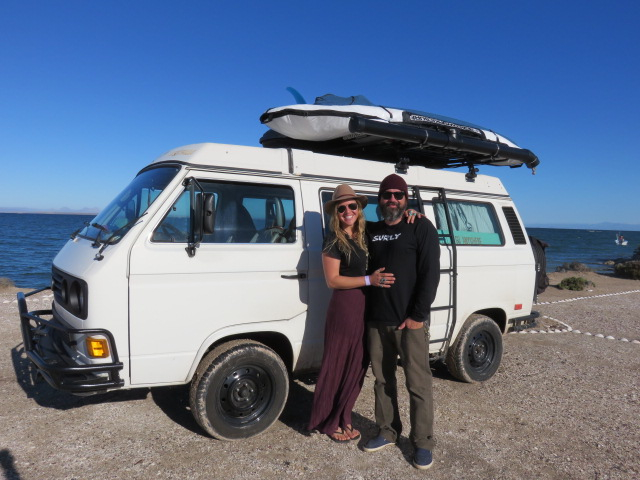 We first met Annie and Jeff at the Mexican border. By coincidence, we met them again at the whale watching site in Laguna San Ignacio and then two more times in Baja.

One of the places where we reunited with Annie and Jeff was at Playa El Requeson, a peaceful beach at Bahia Concepcion (Conception Bay) located on the eastern side of the peninsula. We absolutely loved this place. There was no Internet access, no electrical power, and no running water. This was the “Baja” that we read about in the travel blogs – camping on the beach only steps away from the water, far from civilization and completely self-sustained. 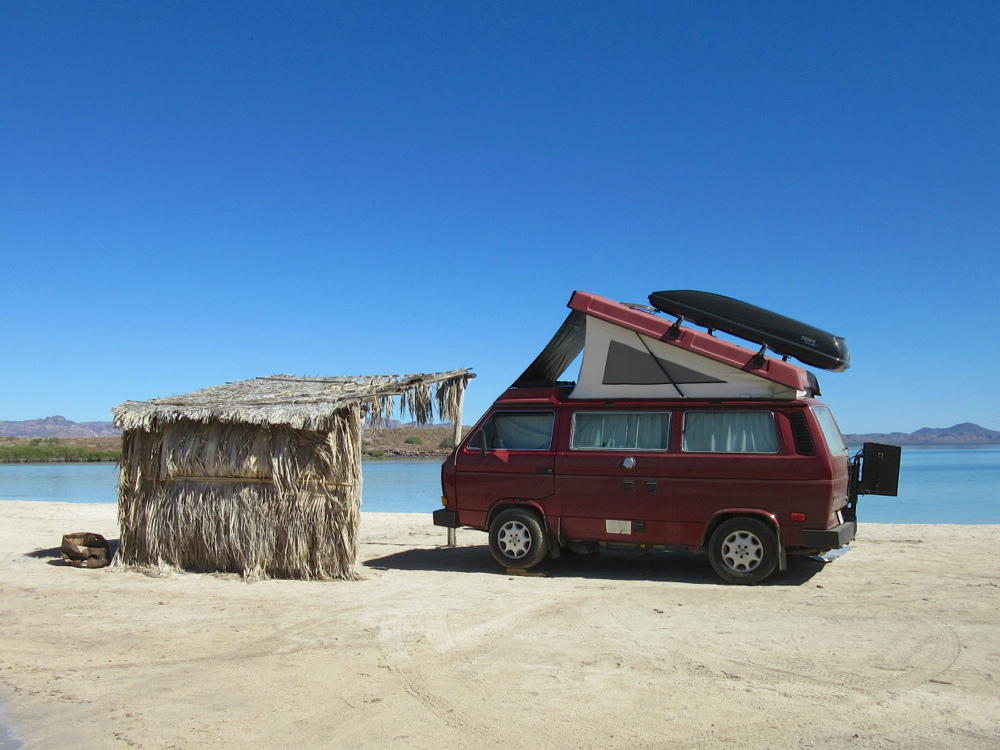 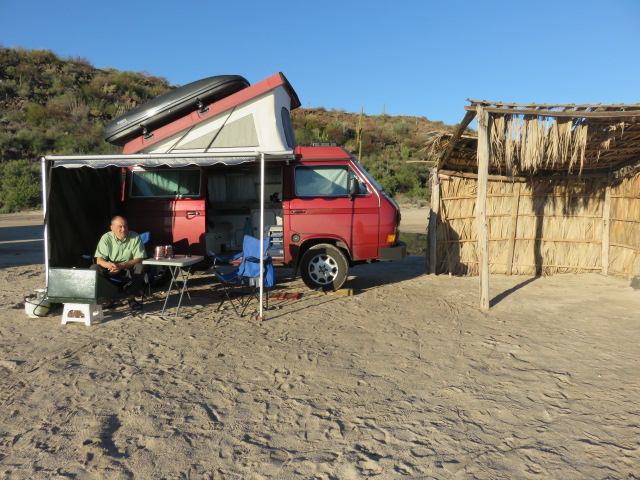 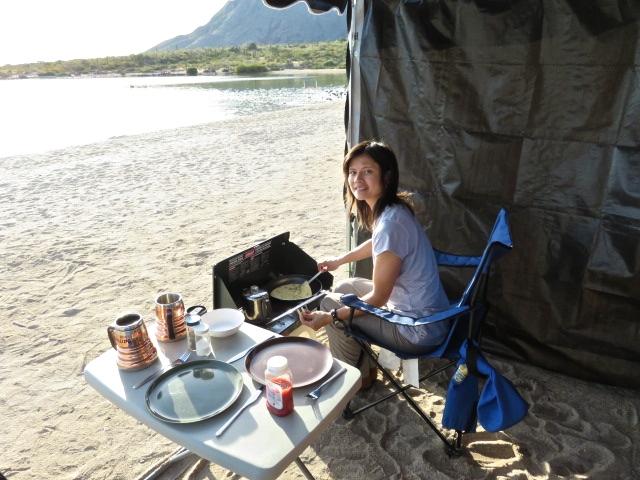 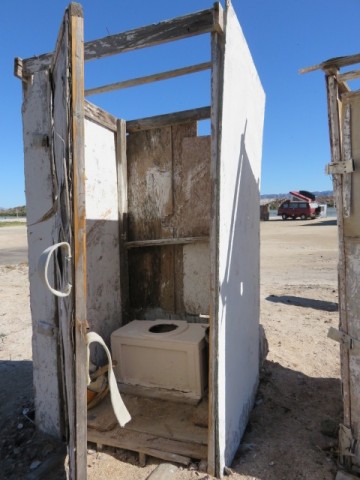 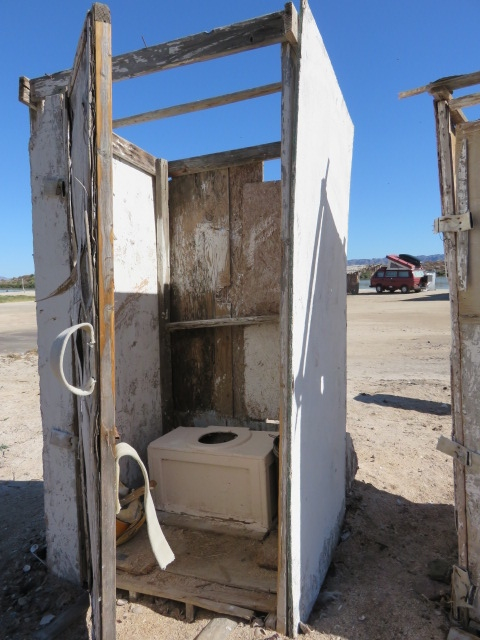 At Playa El Requeson we met Curtis, Jen, and their dog, Buddy. All three of them were traveling in their VW bus ‘Bessy’. Also from Colorado, they suspended their IT jobs to tour the Baja peninsula and documented their adventures in their blog called Bessy The Bus. 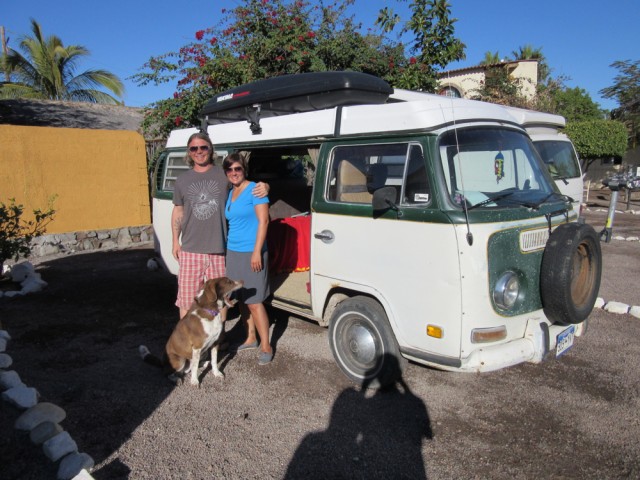 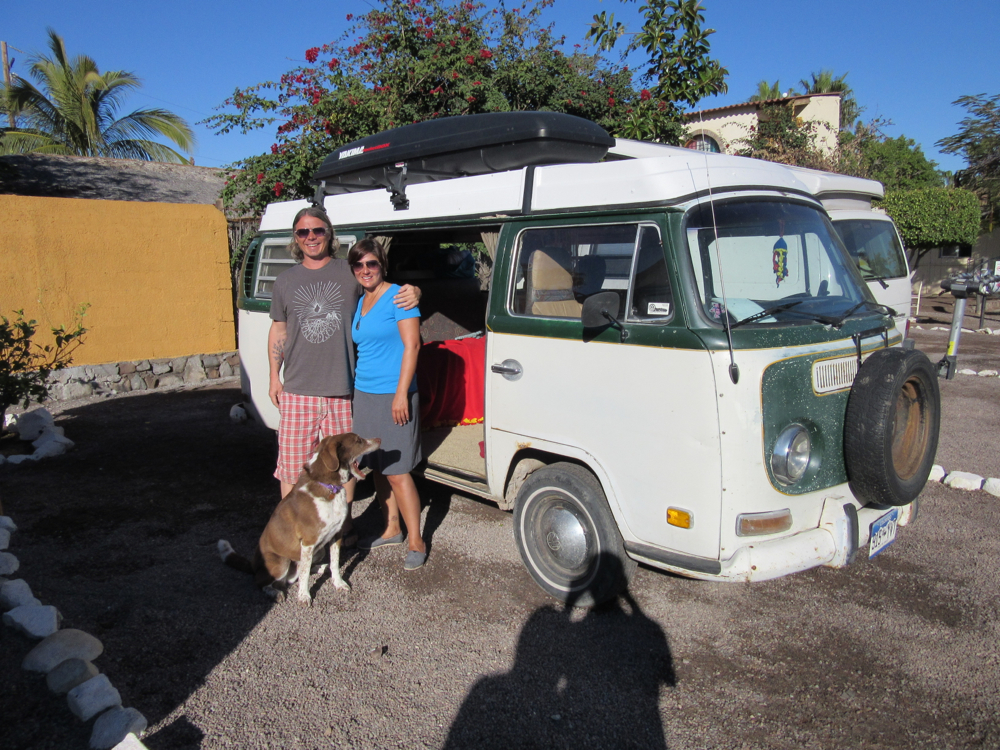 We met Jen and Curtis again several days later in Loreto, and had a fantastic time eating local clam dishes together, sipping margueritas, and chatting until the wee hours at camp.

The six of us in the VW vans shared a beach campfire with Sherry and Grace-Ann from San Diego, CA and Donna from Kelowna, BC. We talked about random topics, like how it felt to be the middle child, or what it was like to have a big brother. We talked about the phosphorescing water just steps from our campers, and the pelicans that dove for fish along the shore, and the awesome sunsets we saw every night. We talked about what it was like to be offline, with no access to the media or Internet, and how it allowed us to notice the phosphorescing water and the pelicans and the sunsets.

Grace-Ann told us a story about how fellow travellers tried to fool her into believing fake news stories because she didn’t have access to media or Internet. Travelers would say: “Did you know that such-and-such-famous-person died?” At first she felt sad that someone she admired had passed away but later she found out that it wasn’t true, so she ended up feeling both relieved and silly at the same time.

About a half an hour after Grace-Ann’s story, Curtis returned to the campfire after checking on his dog, Buddy. Jen asked him why he was away for so long. Curtis said that he was chatting with the retired snowbirds in the RVs down the beach.

“They told me that Clint Eastwood died,” he said.

There was a split second of silence, then we all howled with laughter. He almost got us.

Our last encounter with Annie and Jeff was at Playa Tecolote, near the ferry terminal at La Paz. They introduced us to the term “vanpons” – short for “tampons in the van”. It turns out that Annie and I had feminine hygiene products scattered all over our campers in every nook and cranny. We talked about how our men couldn’t open a cupboard or closet without seeing our lady gear. We talked about all the places where our goods were hidden. I stashed ziploc bags full of tampons and several months’ supply of maxi pads in three different cubby holes AND in our Thule roof box. Every time Gregor needed a tool, he had to maneuver around the vanpons. Poor Jeff had the same problem. We all giggled about our ridiculous storage issue over margueritas, tequila shots, and Gentleman Jack whiskey. To be honest, I don’t remember what else we talked about that day. 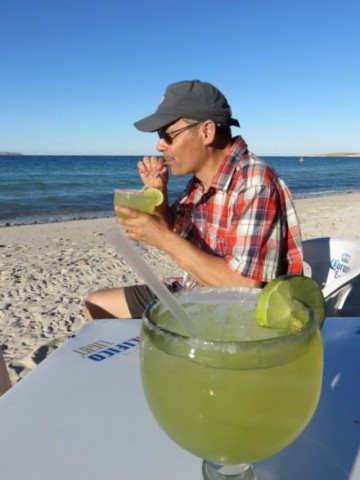 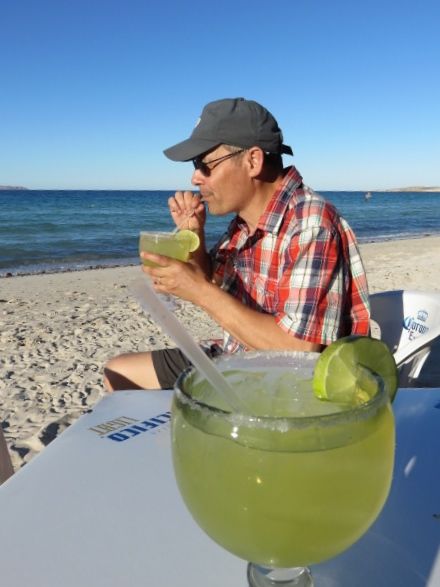 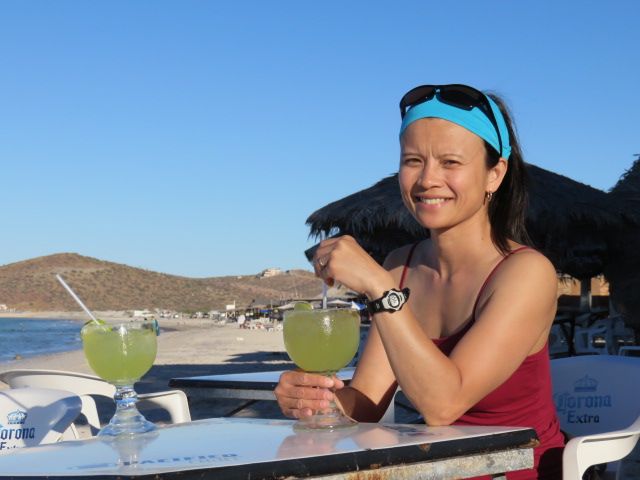 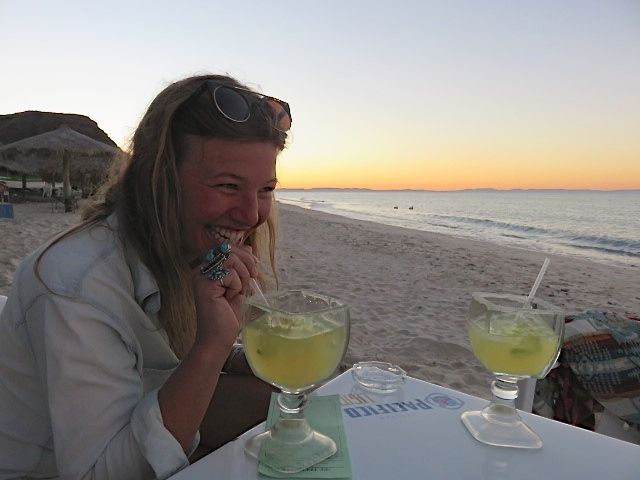 The best conversation we had in Baja was with a Mexican in Las Pocitas, a minuscule town in the middle of nowhere. We stopped there for gas and had just finished eating the ham and cheese sandwiches I made for lunch. I was about to get into the passenger seat when this Mexican guy came up to me. 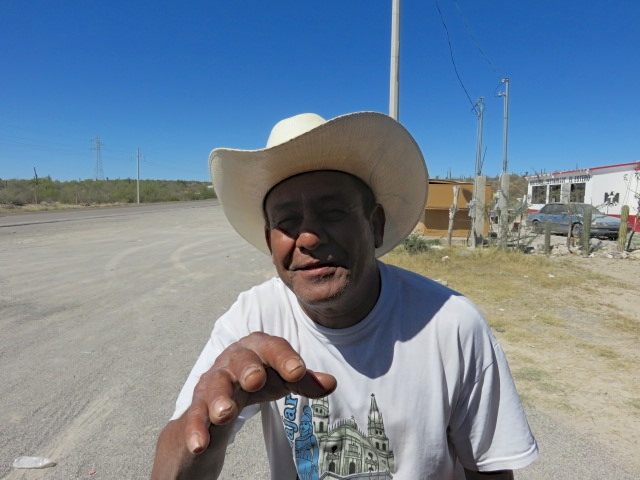 He started speaking in Spanish and I replied in broken Spanglish. The conversation went something like this…

Guy: Nice van.
Me: Thanks!
Guy: Where are you from?
Me: Canada
Guy: It’s cold in Canada!
Me: Yes, very cold. It’s very hot here.
Guy: Yes, very hot now. Where are you going?
Me: We’re going to La Paz. We want to take the ferry to Mazatlan and then travel all of Mexico. Then we’ll drive to Central America and South America, all the way to Argentina.
Guy: [He pauses] You’re driving to Argentina?
Me: Yes, Argentina…Buenos Aires, Mendoza, Patagonia…
Guy: In this van? [He points to the van in disbelief]
Me: Yes. We also sleep and cook in this van.
Guy: [He pauses, then starts giggling] Puta! (Damn!)
Me: [I smile and egg him on in bad Spanish] Loco, no? (Crazy, huh?)
Guy: [He is now laughing uncontrollably, trying to hide his rotten teeth] Dios mio! Que locura! (My God, that’s crazy!) 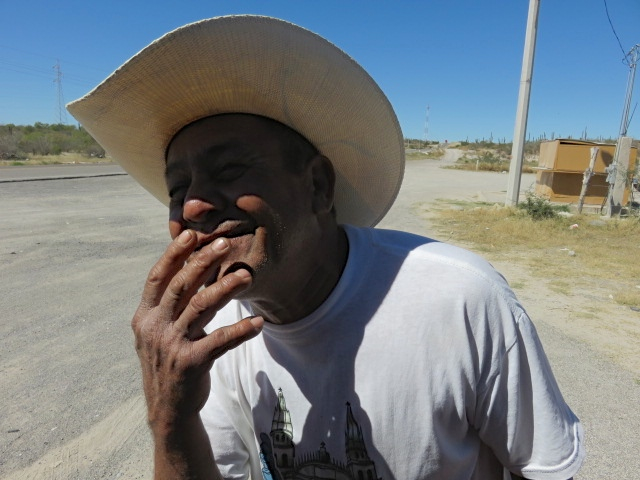 Me: [I start laughing, too] My husband likes to drive. We’ll travel for about one year.
Guy: One year?! [He’s having trouble breathing because he’s laughing so hard now] Both of you in this van for one year?
Me: Yes!
Guy: [Looking at Gregor, still laughing] Good luck, my friend! 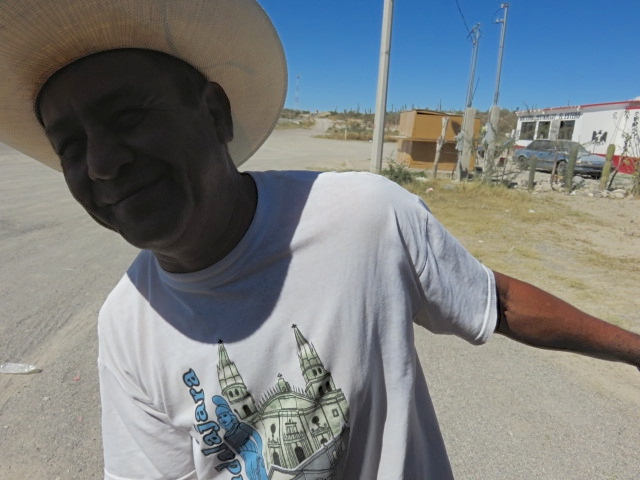 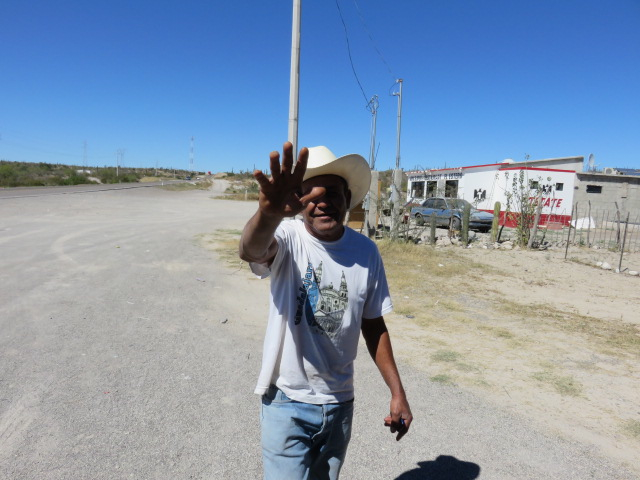 Each time Gregor and I recall our encounter with that Mexican guy, we can’t help but laugh. That was the most awesome conversation we have had in Mexico so far.